See similar publication of our past conferences as "UPADSD" by Elsevier at ScienceDirect.

The conference proceedings will be published by ELSEVIER at the Procedia journal “Environmental Sciences”. ELSEVIER shall include the journal as a part of (Sciencedirect.com) services in open access. The Participants are granted internationally recognized certificates from Roma Tre University and IEREK which will be added to their certificates of experience or could be presented to the official authorities concerned. 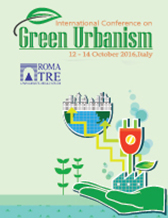 Submit an abstract to GU-4th Edition before the deadline

The Green Urbanism Conference which started on October 12, 2016, included many discussions and covered extremely important topics that will change the world as we know it today.

The opening session was held at Ex Mattatoio – Testaccio, which was led and moderated by professor Fabio Naselli (Scientific Director of IEREK EU) who were of great help in organizing this conference and its sessions.

The Keynote Lectures which was moderated by Professor Anna Laura Pisello (Assistant Professor in Applied Physics at University of Perugia) who were of great help in organizing this conference and its sessions, the lectures titled “Ambiguity in the Forecasts of the Witches: The Notion of Exception in ‘Politically Correct’ Planning Discourses”, “Greening” Urban Tourism. The “community hotel” experience in Bethlehem”, “The livable city. Parks, squares and gardens in the present time”, and “Food, health, and society: the town meets the countryside” were run by the following professors;

Moving on to the parallel sessions which were held at Architectural Department – Monti. The 1st session which was led and moderated by Simone Ombuen (Assistant Professor of Urban Planning, Roma Tre University), and Ferdinando Trapani (Associate Professor in University of Palermo) was titled Local Development & Tourism and was held at the Attavanti hall.

The 3rd session which was led and moderated by Mario Cerasoli (University Researcher in Urban Planning, Roma Tre University), and Ibrahim Maarouf (Associate Professor, Faculty of Engineering, Alexandria University) was titled Transportation & Mobility and was held at the De Vecchi hall.

The 4th session which was at the second conference day and was led and moderated by Anna Laura Palazzo (Associate Professor in Urban Planning, Roma Tre University), and Giorgio Faraci (University of Palermo) was titled Local Development & Tourism and was held at Attavanti hall.

The 6th session which was led and moderated by Roberto Pallottini (Architect & urban planner), and Carmela Canzonieri (Assistant Professor, Kore University of Enna) was titled Urban Planning & Design and was held at the De Vecchi hall.

The second day as well included a Special Session which was led and moderated by Luciano de Bonis (Associate Professor, University of Molise) and was titled Tales of Cities, Moscow & Rome.

The 7th session which was at the third conference day and was led and moderated by Lucia Nucci (Associate Professor in urban design, Roma Tre University), and Nabil Mohareb (Head of Architectural Engineering, Arts and design, Beirut Arab University Tripoli Campus) was titled Urban Planning & Design.

The Conclusion and Closing Session was held at Ex Mattatoio – Testaccio which was led and moderated by Paolo Desideri (Professor of Architecture and Urban Design in the Faculty of Architecture, Roma Tre University).

The gala dinner was after the gorgeous MAXXI museum tour on the second Green Urbanism conference day. The building of the museum was designed by the famous architect Zaha Hadid. The MAXXI Museum is the Italian National Museum of the 21st Century of contemporary art and architecture in the Flaminio Quartiere of Roma, Italy.

The design of the MAXXI museum is very unique, and different environments coexist in a sequence of galleries illuminated with natural light filtered via a special roof system.

Attending conferences is very beneficial on the professional level. Conferences are full of people promoting new ideas which will expand your knowledge and undoubtedly help your career.

You not only get to hear presentations but also converse with other researchers from different universities and even countries you may have only heard or read about. You learn from experts in the field. It is a great opportunity to find more about your field and listen to ideas that could help inspire research ideas of your own.

Not to mention, getting an overview of the place or city where the conference is being held and learning about its people and culture.

Conferences also can expand your resources by providing a great opportunity to promote gathered information on new technologies related to your research. Moreover, they let you test them out, share teaching tools and techniques, or even obtain samples of textbooks.

It is an opportunity to engage with respectable professors and discuss with them the very latest research projects they could be working on.

Indexing and Archiving Papers presented at IEREK conferences regularly appear in notable reviews, publications and databases, including referencing and abstract.

Digital Archive All conference papers are archived online in the IEREK E-Library (http://www.IEREK.com) where they are immediately and permanently available to the international scientific community.

Journal participants may attend after the conference to submit an enhanced version of their research for possible publication at our journal on IEREK website.

Once an abstract is submitted, it will be sent to the reviewers' committee to go through the revision process:

Once an abstract has been submitted to our website, it is assigned for review by the reviewers using the abstract review sheet and validation of publication. This is based on four criteria:

· Conditionally accepted for publication (with revisions provided to authors).

· Rejected but encouraged for re-submission with major modifications.

· Rejected as inappropriate or unworthy of publication in this certain conference.

The criteria for accepting abstracts for the conference are as follows; a relevant topic of the conference should be proposed with clear writing, aims, and objectives of the study clearly presented, as well as a sound literature and methodology of the work.

Authors will receive a notification message to know the feedback of the reviewers' committee. If an author receives the acceptance of his or her abstract, he or she has to continue writing the full-length paper using the requested templates.

The final paper will proceed to the primary revision to be checked if it meets the conference proceedings standards. Once it gets preliminarily accepted, the author of the paper will be informed to pay the fees so that it could be sent for the final revision by the scientific committee.

Those with full papers and who have paid the requested fees will get finally inspected, either scientifically or linguistically. There will be a rigorous review process of full papers following the previous process according to the following criteria:

(1) Is the topic relevant to the conference?

(2) Are the writing and structure clear?

(4) Are the aims of the study clearly stated?

(5) Are the objectives of the study achieved?

(6) Is the literature review relevant and adequate?

(7) Has the author used an appropriate methodology and has it been clearly explained?

(8) Has the author interpreted the findings correctly?

(9) Is the paper a significant contribution to the field?

These are the registration and revision procedures for publication that all authors should follow.

The conference proceedings will be published by ELSEVIER at the Procedia journal “Environmental Sciences”. ELSEVIER shall include the journal as a part of (Sciencedirect.com) services in open access. The Participants are granted internationally recognized certificates from Roma Tre University and IEREK which will be added to their certificates of experience or could be presented to the official authorities concerned.
Plagiarism Policy

IEREK has an unyielding policy regarding plagiarism. We believe that copying/taking the ideas and work of other Authors without permission and credit, is fraudulent. The Reviewing committee and IEREK employees have the authority to reject a paper during its reviewing process,  on the basis of the paper being subjected to either minor or major plagiarism. Duplicating any content, even if it is one sentence or one table without the consent of its original Author, will lead to the paper’s refusal upon the complaint of the plagiarism victim.

Abstracts should clearly state the purpose, results, and conclusions of the work to be described in the final paper.
A maximum of a 300-word abstract is to be reviewed.

After you have received the acceptance of your abstract, please continue to write your full paper with the requested template. To meet ELSEVIER’s instructions, make sure that your abstract in your full paper does not exceed 100 words (extra words could be moved to the introduction).

Final acceptance will be based on the full-length paper (maximum 12 pages, and any extra page will be charged 50 Euros). For publication, the accepted papers must be presented at the conference.

English will be the official language of the Green Urbanism Conference. Writing Templates: Authors are strongly encouraged to use the formatting style described below for submitting an abstract as this format is required for the full paper.

Please Follow the Following Links for more instructions for Authors:

– Payment for an author is mandatory after he/she has received a notice of preliminary acceptance as confirmation of attendance.

– The payment deadline is expected to be met only 3 DAYS after each author has received his/her primary acceptance. Such policy will not be valid after the 1st of September, 2016 as the late payment period, during which an extra fees will be added, will have begun.

– Each research paper should have at least one main author who should pay the full fees, after the “preliminary acceptance”, (Author’s fees + Publication Fees), even if the main author is a Master’s or a PhD candidate, and even if the author won’t be able to attend the conference.

These fees include the registration of only one author to the conference. (As shown in the table, row 1),

– A research paper fees allow only one author, whether he is the corresponding author or any co- author to attend the conference and receive only one copy of the conference book in both hard and soft copy (a Printed book + a flash memory)

– The fees of Conference book (hard copy + flash memory) for audiences and co-authors, is shown in the table row 3

– In case students or interested audience want to attend the conference without presenting a paper, they must pay the specified fees. (As shown in the table, row 5).

– Additionally, the online open access at sciencedirect.com had fixed fees that does not get the discount offer, even if the fees had been paid early.

– Delegates who cancel their registration due to special circumstances less than 60 days before the start of the conference and do not have a paper published in the proceedings will receive a complete refund minus a €100 administration charge. If the proceedings book is already published, the fees cannot be refunded.

– Refunds are surely applicable if an author receives rejection for a submitted article.

– Please notice that we will endeavor to assist you in obtaining a visa (if needed), by sending an invitation letter, but the responsibility is yours and the decision rests solely with the appropriate Embassy.

The conference proceedings will be published by ELSEVIER at the Procedia journal “Environmental Sciences”. ELSEVIER shall include the journal as a part of (Sciencedirect.com) services in open access. The Participants are granted internationally recognized certificates from Roma Tre University and IEREK which will be added to their certificates of experience or could be presented to the official authorities concerned.
Featured Conferences
Conservation of Architectural Heritage (CAH) – 6th Edition
Luxor, Egypt
07 Feb 2022
Hiroshima International Conference on Peace and Sustainability 2022
Hiroshima University, Japan
01 Mar 2022
Publication Case Study

See similar publication of our past conferences as "UPADSD" by Elsevier at ScienceDirect.

The conference proceedings will be published by ELSEVIER at the Procedia journal “Environmental Sciences”. ELSEVIER shall include the journal as a part of (Sciencedirect.com) services in open access. The Participants are granted internationally recognized certificates from Roma Tre University and IEREK which will be added to their certificates of experience or could be presented to the official authorities concerned.