Participants who attend the conference events and wish to publish their research will be asked to submit an extended version of their paper for possible publication in IEREK International Journal. 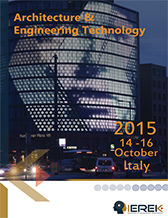 The International Conference on Urban Planning and Architectural Design for Sustainable Development were held in the University Of Salento- Lecce Italy.  The conference was chaired by Professor Fabio Pollice (Department Of History, Society and Human Studies, University Del Salento) and organized by IEREK.
The opening session was held at Castello Carlo V, which was opened by a welcoming word from Prof. Vincenzo Zara (Rector of the University del Salento), Prof. Vitantonio Giola (Director of the Department of History, Society and Human Studies), and Prof. Franco Salvatori (President Emeritus of Italian Geographical Society).

It was shortly followed by a word from the Mayor of Lecce Dr. Paolo Perrone. Later on, Mr. Mourad Amer (IEREK’s CEO), and Prof. Fabio Pollice (Scientific Coordinator of the Conference) made an introduction about the conference and its delegates, officially starting the conference, and allowing for the plenary sessions to begin.

The plenary sessions titled “The Sustainability of Planning a Critical approach”, and “Historic Centers and Tourism Development: Sustainable Paths” were run by the following professors;

-Prof. Mohsen A. B. BAYAD, architect (University of Alexandria)

Moving on to the parallel sessions which was held at the Monastero Degli Olivetani- Lecce and which was led and moderated by great and reputable professors who were of great help in organizing this conference and its sessions. The topics discussed during the conference are of great interest to Lecce, which led in creating the “Round Table” that consisted of key people in Lecce and the University of Salento, discussing the urban regeneration projects in Lecce which was opened by, Professor Sergio Conti (President of the Italian Geographical Society), and was then discussed by;

After the “Round Table” finished their discussion, the conference has moved to the public discussion which had many of the delegates participate in it, with a remarkable not to one of the Authors, Chaham Alalouch, thanking IEREK for its efforts, and also stating that IEREK is the first ever in the middle east to organize such great events. Taking the conference to its summary by MR. Mourad Amer (IEREK’s CEO), and to close the conference with the conclusions by Prof. Fabio POLLICE (Scientific Coordinator of the Conference, University of Salento), and Prof. Angelo TURCO (Dean of the Faculty of Arts, Tourism and Markets, IULM University).

The conference’s dinner took place in the Grand Tiziano Hotel at Lecce located near to where the parallel sessions were held, at the Monastero Degli Olivetani- Lecce.

The Participants were awarded, and internationally recognized certificate from IEREK that they have attended the conference and presented their papers.

Nowadays, engineering technology has to cope with the rapid industrialization and urbanization seen in most countries.

Creative design and construction practices are challenging tasks to the architects and engineers to meet the ever growing demands of society.
Representing The first international conference on Architectural and Engineering Technology in the form of presentation of new developments and research results in these fields.

IEREK  aims to invite scientists, scholars, engineers and students from the universities and the research institutes from all over the world to present research activities and research findings, and thus to foster research relations.

This conference provides excellent chances for the delegates to exchange new ideas and application experiences face to face, to establish research or business relations and to find global partners for future collaboration. It also serves to boost communication among researchers and practitioners working in a wide variety of scientific areas with a common interest in improving Material, Architecture, and Engineering Technology- related strategies.
Conference Topics
Benefits Of Attending

Why attend this conference?
Attending a conference isn’t all about personal and career development. Since there are so many high-quality conferences and events put on each year, you actually need to opine about which ones you should go to and which you’ll benefit most from.

You not only get to hear presentations but also converse with other researchers from different universities and even countries you may have only heard or read about. It is a great opportunity to discover more about Engineering technology and listen to ideas that could help inspire research ideas of your own.

Not to mention, taking an overview of the place or urban center where the conference is being entertained and learning around its people and civilization
When designing our course of studies we are continuously aware of the fine balance between theory and practice therfore, It is an opportunity to engage with respectable professors and discuss with them the very latest research projects they could be working on.

Indexing and Archiving Papers presented at IEREK conferencesregularly appear in notable reviews, publications and databases, including referencing and abstract.

All conference papers will be digitally archived online in the IEREK E Library(http://www.IEREK.com) where they are immediately and permanently available to the international scientific community.

Journal participants may attend after the conference to submit an enhanced version of their research for possible publication at our journal on IEREK website.

Once an abstract is submitted, it will be sent to the reviewers committee to go through the revision process:

Once an abstract has been submitted to our website, it is assigned for review by the reviewers using the abstract review sheet and validation of publication. This is based on four criteria:

· Accepted as is for publication (with minor editing changes).

· Conditionally accepted for publication (with revisions provided to authors).

· Rejected but encouraged for re-submission with major modifications.

· Rejected as inappropriate or unworthy of publication in this certain conference.

The criteria for accepting abstracts for the conference are as follows; a relevant topic of the conference should be proposed with a clear writing, aims, and objectives of the study clearly presented as well as a sound literature and methodology of work.

Authors will receive a notification message to know the feedback of the reviewers committee. If an author receives the acceptance of his or her abstract, he or she has to continue writing the full-length paper using the requested templates.

The final paper will proceed to the primary revision to be checked if it meets the conference proceedings standards. Once it gets accepted, the author will be informed to pay the fees so that it could be sent for the final revision by the scientific committee.

The full papers that paid the requested fees will get finally inspected, either scientifically or linguistically. There will be a rigorous review process of full papers following the previous process according to the following criteria:

(1) Is the topic relevant to the conference?

(2) Is the writing and structure clear?

(4) Are the aims of the study clearly stated?

(5) Are the objectives of the study achieved?

(6) Is the literature review relevant and adequate?

(7) Has the author used appropriate methodology and explained them clearly?

(8) Has the author interpreted the findings correctly?

(9) Is the paper a significant contribution to the field?

These are the registration and revision procedures for publication that all authors should follow.

Abstracts should clearly state the purpose, results and conclusions of the work to be described in the final paper. A maximum of a 300- word abstract is to be reviewed.

After you have recieved the acceptance of your abstract, please continue to write your full paper with the requested template (please download). To meet ELSEVIER’s instructions, make sure that your abstract in your full paper not exceed 100 words (extra words could be moved to the introdution).

Final acceptance will be based on the full-length paper (maximum 12 pages, and any extra page will be chaged 50 USD). For publication, the accepted papers must be presented at the conference.

English will be the official language of the conference” Architecture and Engineering Technology”.

Writing Templates: Authors are strongly encouraged to use the formatting style described below for submitting an abstract as this format is required for the full paper.

Authors are strongly encouraged to use the formatting style described below for submitting an abstract as this format is required for the full paper.

– For the online open access at sciencedirect.com, it has fixed fees that do not get the discount offer, even if they are paid early.

– Every research paper should have at least a main author who should pay the full fees, even if the main author is a Master’s or a PhD candidate. These fees include the attendance of only one author to the conference. (As shown in the table, row 1),

– In case there is a co-author who is either a student or a professor and wants to attend the conference, participate in its activities and get a certificate of attending, he or she has to pay the specified fees (As shown in the table, row 5),

– In case students or interested audience want to attend the conference without presenting a paper, they must pay the specified fees. (As shown in the table, row 6).

(25% discount only for Author fees has Expired!)

– Additionally, the online open access at sciencedirect.com had fixed fees that did not get the discount offer, even if they had been paid early.

However, Another two week discount is being offered,


To benefit from a 10% discount only for Author fees (The paper fees):

– The online open access at sciencedirect.com has fixed fees that do not get the discount offer, even if they are paid early.

– Please notice that we will endeavor to assist you in obtaining a visa but the responsibility is yours and the decision rests solely with the appropriate Embassy.

For participants who need Entry Visas, IEREK will issue a visa letter by Salento University for applicants who are accepted to present at our conferences.

Please notice that we will endeavor to assist you in obtaining a visa but the responsibility is yours and the decision rests solely with the appropriate Embassy.

However, you are required to prepare your papers according to the regulations of your country’s embassy/consulate. To do this, you will need to visit the embassy/consulate website or by contacting them.

In case of any missing document during the appointment or any other unfortunate incident that leads to your rejection, IEREK clears its responsibility as we will have done our part in providing the documents we can provide to ease the process.

A young dynamic university, keen to expand and to prove itself at a national and international level. Since 1955 the Università del Salento has had the aim of promoting knowledge, skill and merit and has offered a large range of educational opportunities.

Participants who attend the conference events and wish to publish their research will be asked to submit an extended version of their paper for possible publication in IEREK International Journal.
Scientific Committee
Publications

Participants who attend the conference events and wish to publish their research will be asked to submit an extended version of their paper for possible publication in IEREK International Journal.