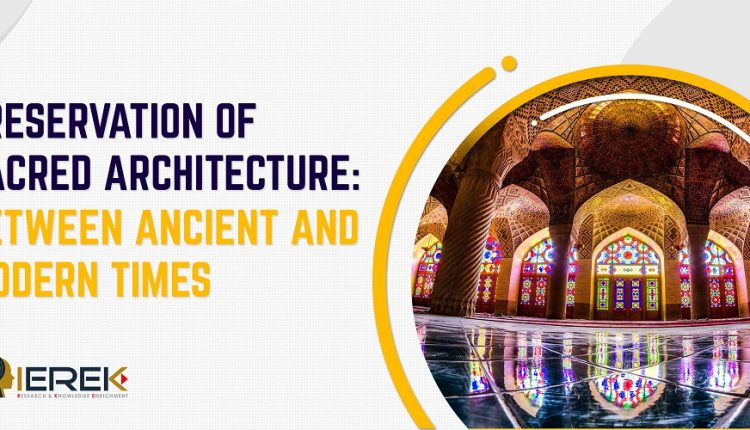 There is a correlation between religion and architecture that goes back to ancient times. Religion has a tremendous influence on architecture to the extent that it has become the subject of extensive research. In ancient cultures, religious buildings like churches or temples had a major significance and were considered the most prominent and influential buildings in any community.

Religion and art are intertwined simply because both represent human history, development, and culture. Religion as a source of spiritual inspiration for human culture and creativity brings Man and divinity together via tradition and myth. Moreover, when it comes to art, through visualizing experiences, stories, and dreams, Man brings his hidden identity into view and plays a crucial role in the evolution of all religions; because performing customs and mythological traditions are linked in theory and practice. Hence, religion and art are united and related to each other.

In other words, art shares the same goal of religion, which is to achieve human salvation via superior, ideal, or holy models.

Preserving sacred architecture in the past:

Preserving sacred buildings and places of worship, such as mosques, churches, synagogues, and temples, has been a major concern in ancient times since these buildings serve as shelters for the images, relics, and holy areas of the cult. That is why sacred architecture plays a unique role in the cultural heritage of any country, as it is considered one of the main components of cultural heritage material.

Numerous cultural property preservation organizations address sanctuary buildings, religious communities, houses of prayer, and different spots of worship, bringing up the issue of the legal structure for their protection, activity, and restoration, just as financing. Therefore, sacred architecture is not only about the style but also the historical and cultural heritage of the country.

In the past, places of worship such as churches and temples were not always designed for public use as the public was prohibited from entering these places. Moreover, there are vivid examples of ancient civilizations that prove this fact. For instance, in ancient Egypt and India, temples were considered the residence of the divinity, and, accordingly, the public was not allowed to enter the sanctum, except for priests who were the only people privileged to enter.

This concept can be applied in other civilizations too. For instance, there were plenty of temples and churches in ancient Greece, and they encompassed the cult image that can be accessed. However, religious services were held outside the main building. In the ancient Near East and the Mayan and Aztec architecture of ancient Mexico, the temples were built at the summit of pyramidal mounds, and only the privileged members of the community were allowed to approach or enter. (Britannica)

Efforts for preserving sacred buildings in the meantime:

Preserving religious heritage is given extensive attention by international institutions in the meantime such as UNESCO, which exerts remarkable efforts to protect religious sites from damage through the effective implementation of the World Heritage Convention. It is also noted that current religious sites have often been placed on UNESCO’s World Heritage List specifically for their religious and spiritual significance. Sacred places are significant parts of larger ensembles, such as historic cities and cultural landscapes.

According to the UN Plan of Action to safeguard religious sites, UNESCO plays a particular role in protecting and promoting cultural and religious pluralism, particularly by safeguarding the cultural heritage of religious interest. The “Statement on the Protection of Religious Properties within the Framework of the World Heritage Convention,” adopted in 2010, was the first document to provide general recommendations on this specific issue and led to the launch of the UNESCO Initiative on Heritage of Religious Interest, which supports the Member States in the development of general guidance regarding the management of religious heritage.

The significance of these sites and the interest of associated religious communities should be duly recognized in sustainable management processes. Therefore, IEREK organizes the second edition of the International Conference on “Utopian and Sacred Architecture Studies USAS” to further discuss the influence of these sites on modern architecture.