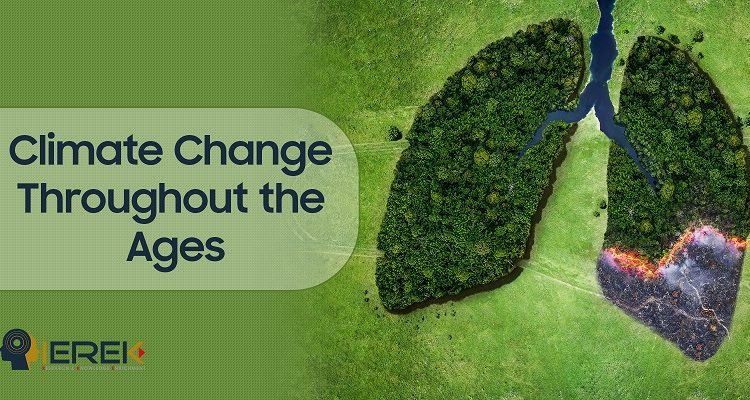 These shifts are caused by many factors, most of which used to be natural, but as the 1800s rolled in and humans began their many revolutions, especially the Industrial Revolution from the year 1760 till around the year 1830, human activities became the main driver of climate change and thus affecting the sustainability of life on planet Earth.

Moving back to a time before humans roamed planet Earth, natural causes were the leading and only causes of climate change.

Geological records show that a vast number of variations have happened in the Earth’s climate. These have been caused by many factors such as but not exclusive to changes in the sun, emissions from volcanoes, variations in Earth’s orbit, and levels of carbon dioxide (CO2) in our atmosphere.

These changes commonly take a very slow journey, over thousands or even millions of years. However, in the past two centuries, research has proven that climate change is changing more rapidly than any other time shown in geological records and this in foresight can and will affect life on Earth.
As we move forward in time, we reach the days of Ancient Greece, around 400 B.C., when many scholars and scientists proposed that humans had a hand in climate change.

This was through the acts of chopping down trees, plowing fields or even simply irrigating a desert. These simple acts proved to actually change temperatures and, in turn, even influence rainfall.

One of the theories that also arose was that “rain follows the plow,” which believed that the idea of tilling soil and other agricultural practices would result in increased rainfall, but this theory was discredited after the Dust Bowl of the 1930s when, despite the efforts to plant the soil in the Southern Plains region of the United States of America, almost a decade of drought and severe dust storms hit the area.

Even though multiple theories arose to describe climate change, the theory that surfaced in the 1820s is still what we currently believe nowadays. In that decade, a French mathematician and physicist, Joseph Fourier, proposed that the energy reaching planet Earth from the Sun, that energy being sunlight itself, must be balanced out by energy returning to space as heated objects themselves emit radiation. Fourier’s main point of study and discussion was that some of that energy returning to space would be held in the atmosphere and keep planet Earth warm.

To further simplify it, Fourier described Earth’s thin covering of air, or atmosphere as most of us know it, to act as a glass greenhouse would. Sunlight, the energy radiating from the Sun, would enter through this glass barricade but would then be trapped inside. Experts in our current times, viewed this simplification as an over-simplification since recent studies have shown that infrared radiation is actually absorbed in the atmosphere rather than trapped in it.

As more and more scientists look into the Greenhouse Theory, multiple pieces of research and ideas began to arise around if gases in our atmosphere also contributed to the Greenhouse Effect. Irish Scientist, John Tyndall, carried out multiple laboratory tests in the 1860s, proving that coal gas, which contains carbon dioxide (CO2), methane, and volatile hydrocarbons, was especially effective at absorbing energy.

Furthermore, Tyndall demonstrated that CO2 alone acted like a sponge and could absorb multiple wavelengths of sunlight.So how exactly does climate change affect us? Back in the 1890s, the concept of warming the planet was remote and even widely welcomed, contrary to our present stance on climate change.

The causes of climate change in our current era are multiple, but the good news is that they are reversible and can be halted. Among these causes are the burning of coals, oils, and gases; deforestation; increasing farming livestock; using fertilizers containing nitrogen and fluorinated gases in home appliances such as refrigerators and air-conditioners.

Multiple individuals worldwide are currently trying to help keep Earth sustainable. In 2016, the Paris Agreement often referred to as the Paris Accords or the Paris Climate Accords, was signed in Paris to strengthen the global response to the threat of climate change.

This will be done by keeping the global temperature below 2 degrees Celsius above pre-industrial levels. It also aims at limiting the temperature increase even further to 1.5 degrees Celsius. In 2019, a Youtuber named MrBeast ignited a fundraiser under the name Team Trees to help plant 20 million trees to decrease climate change.

The United Nations has listed some of the many acts that we can do to stop climate change. Saving energy at home by multiple methods such as lowering our use of heating and cooling appliances and even air-drying our laundry can help stop climate change.

In addition, walking or cycling instead of using a private car for each one of us will decrease the emission of CO2 gases from vehicles. These small acts, if carried out by all of us, will keep climate change at a minimum and keep planet Earth a sustainable place to live for future generations to come.

IEREK is one of the organizations that focus on finding solutions to stop the negative effects of climate change. In the second edition of the International Conference on “Climate Change and Environmental Sustainability (CCES),” IEREK aims to gather researchers and environmentalists to share their ideas and find solutions to save Planet Earth from the negative impacts of civilization. We want to develop and modernize our world, while preserving Planet Earth.

How can you select the right research topic as academic researcher?

Preservation of Sacred Architecture: Between Ancient and…