Ephemeral Design for the Marginal Urban Spaces in the Slopes of Enna.
Quick Links
Navigation
Contact

Upcoming Events
Ephemeral Design for the Marginal Urban Spaces in the Slopes of Enna. 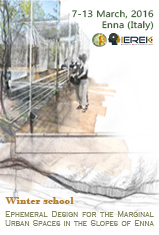 IEREK held the winter school for “Ephemeral Design for the Marginal Urban Spaces in the Slopes of ENNA” KIWI 2016” in ENNA Italy, IEREK main aim was to cross the social-cultural restrictions. Involved students and young designers in discussions that will have impacts on designs and urban planning, students were groups of 10 with one leader and one instructor who taught them new design paradigms and clarified how the process of construction is deployed. The main project that IEREK gathered students for was under “Integrated Project” principles. IEREK with the collaboration of KIWIS university gathered more than  50 students from all over the world and more than 10 experienced Instructors and local community representatives to represent the winter summer school and a great contribution from IEREK to enhance and inspire the Architectural world.

The Faculty of Engineering and Architecture at the University Kore of Enna is pleased to present the 2016 edition of KIWiS, Kore International Winter School.

A full-time experience of study, of research and of application that provides participants the opportunity to reflect on the urban regeneration both of the urban fabric and of the common values of the city of Enna, through:
the practice of the Urban, Landscape & Architectural Design and of the Design for Public Spaces, the application of the theories and of the modalities on the bases of the Integrated Relational Tourism (IRT) as resource for the Open Urban Spaces Regeneration.

The on-field experience in an application for the socio-cultural animation on the way of the Ephemeral Design (Temporary, Transitory, Flexible, Reversible, Low-cost and moderate).

The Winter School aims to promote a multi-disciplinary approach in an international comparison to encourage the development of additional and innovative skills of the regular training programs. The belief is that an opportunity to collegially reflect may provide insights and alternative opportunities for the enhancement of marginal urban areas, helping to promote and to redesign new scenarios, new features and new ways of living the public space.

Participants will have the opportunity to being hosted in the heart of the historical centre of Enna, study case chosen for the 2016 edition, where they will live its open spaces and will being able to interweave human relationships with its inhabitants, to come into direct contact with the architectures, the traditions, the productions and the culture of the city, wandering along the paths more minutes of the historic fabric, discovering singular places and local activities; to enjoy the views offered by the city, in its fringe fabrics, on three-quarters of the entire Sicilian territory, reflecting on the reasons of the actions to be put in place for the regeneration of the formless linear system of urban spaces along the slopes.

The design exercises will focused on those edges of the oldest city fabrics, coinciding with the physical limits of the rise on which rests the Upper City, making the slopes as an element of belt and of frame, at the same time. A band of boundary between natural and anthropic landscape that has taken, in several places, clear characters of physical, economic and social marginality and that suffers from a state of neglect and decay, not generalizable but widespread and recurrent, along the 7,000m, of the external perimeter.

Attention is focused on the targets in activating the life cycles of the urban ecosystem interrupting, whenever possible, those degradation processes, typical of the marginal urbanized contexts. The soil and its fertility, the water and its life cycle, the plants and their contribution to the vitality of the environment, cease to be passive components of the city and take on a new meaning: that of “active environmental infrastructures” in the process of restore of the conditions of ecological functioning of the city.

During the activities of the School, participants are challenged to develop multi-scalar visions:

a) about an overall idea of the city (Master Plan).

b) in detail, in those points which we can considered “remarkable” and to rethink because able to trigger broader scope repercussions (Pressure Points).

c) until such the production of punctual ephemeral installations, such as meta-activators of potential processes of active involvement for an urban regeneration, participated and shared (Public Design).

The economic downturn, that has affected most European cities, is also having effects on the processes of urban transformation and urban regeneration. More and more often we see cases of “big” projects abandoned, delayed or lapsed, so for the difficulties encountered by operators, as for the exponential delay of the times for approval or implementation or, as in most of the recent cases, by the supervening unsustainability of the costs of realization.

In the light of recent experiences, it is clear today that this approach to urban design, characterized by the great works, long lead times and very high costs, is questioned and seems in crisis.

Is no more the time for great interventions, projected over the long term and needy of huge capitals, it is necessary to improve the quality of urban life with small actions, fast, flexibles, low cost and low or zero impact, in the places of everyday life: in the spaces of real life.

There is a need for projects that sink in an extensive and widespread way the territory and this requires coordinated measures and systemic micro projects, sufficiently flexible, and above all, in a modus operandi different from that developed in the past season of the great urban project. Even given the increasing role of the private in the care, management and implementation of the actions for the regeneration of urban space.

The school asks at the scholars participants (urban planners, architects, designers, sociologists, geographers, etc.) at the local community and at the public administration, a contribution on the real perspectives of the urban regeneration projects, in a perspective of ephemeral design, temporary, transitory, reversible, low-cost and flexible to the required changes. It will explore what are the practices capable of transforming the borderline between public and private space in an approach that also raises problems of interpretation methodological, juridical, of management and of strategic planning.

In this sense, the application experience should be construed as a restitution of a sample picture of how it could be regenerated a given place if it had implemented the project thought for that place; helping, as a prototype, to understand what results you could achieve in the reality.

The “sharing” becomes a device for the re-appropriation of open urban space and is intended as practice for an aware co-use of spaces by the urban population. It may generate unanticipated uses and a high density and intensity of living in different paths. Becoming a practice that can change the meaning itself of both public space and private space, to restore a balance between built spaces and void spaces, between natural soils and artificial soils.

The interventions of ephemeral architecture was seen, then, in the key of potential activators of shared forms of urban regeneration, will be proposed in the final stage with a sequence of temporary installations capable of conferring to the spaces, even if temporarily. A “meta-real” aspect of the effects of that virtual urban transformation that you want to get into the drawn project.

By establishing, thereby, with the city a true moment of local awareness and animation, fleeting but realistic, that can trigger interest and generate a collective activism; so to aspire in activating of a virtuous process of re-appropriation of space and restatement of the missing functions.