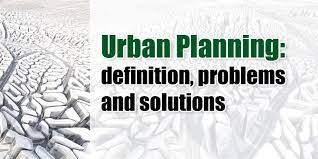 Summary: Urban Planning is a large-scale concept concerned with planning and development at all levels ( architectural, infrastructural, ecological, economic, and even political ).

During this process many problems & obstacles come up but luckily the same as any other kind of problems, there are solutions and precautions which we will discuss in detail.

What is Urban Planning simply in less than 2 minutes?

According to Wikipedia, Urban  Planning is a technical  and  political  process  concerned with the  development  and  use  of  land, protection and use of the environment, public welfare, and the design of the urban environment, including air, water, and the infrastructure passing into and out of urban areas, such as transportation, communications, and distribution networks.

On the other hand, English Lexicon describes Urban Planning as a branch of architecture dealing with the design and organization of urban space and activities besides determining and drawing up plans for the future physical arrangement.

Here in IEREK, we believe that Urban Planning must be accompanied by sustainability concept which enables us to carry out the urban development process in the right way to keep up the sustainable environment for future generations.

The basic concern of city-town planning is the internal form, structure, function, and appearance of urban areas.

Physical aspects such as buildings, roads, land use, etc., play an important role in urban planning, at the same time social, economic and technological forces should also be considered while planning so that a healthy environment is created in the city/town.

Apart from this problem, some factors also complicate the task of planning as follows:

Urban Sprawl refers to the migration of a population from populated towns and cities to low-density residential development over more and more rural land which results in:

b)      Individual Control or Small Parcels of Land

Private ownership of small parcels of urban land sometimes interferes with the effective control of the space pattern of the city like the following:

Every city/town occupies a unique environmental site, hills, valleys, rivers, waterfronts, or any other physical features make one city/town look different from another as following:

Affordable housing is housing deemed affordable to those with a median household income. Housing choice is a response to an extremely complex set of economic, social, and psychological impulses as follows:

As we mentioned before Urban Planning must be accompanied by the sustainability concept. Here where we should stand and understand that the city is more than the sum of its parts. It is a whole living thing that is constantly changing, evolving and morphing into an ever more ECO-Friendly and welcoming entity which can be achieved through innovative sustainable solutions such as following:

a)      Sustainable and Affordable Housing

Census population doubles which require more housing spaces, yet our goal to meet the needs of the present without compromising the ability of future generations to meet their own needs.

Sustainable Housing means “housing which contributes to community building, to social justice, and to economic viability at a local level” (Morgan and Talbot,  2001, p. 321).

Morgan and Talbot  argue  that sustainability  should  be  the  main  principle  to  design  housing  and  one  of  the  important dimensions of the housing quality.

Also, Development of Sustainable Housing refers to not only the development of building but also the layout of the housing areas since Quality of Dwelling life is not just simply concerned with having a roof over one’s head and a sufficient amount of living space, but also with social and psychological satisfaction.

Affordable Housing has become a commonly used term for summarizing the nature of the housing difficulty in many nations. He identifies six elements of measuring housing expenditure to an income ratio to measure housing affordability.

Here is “Alejandro Aravena” comes with an innovative solution for Housing Affordability through his architectural philosophy.

There is a need for Zero-Carbon Cities which are urban areas powered by renewable energy techniques and technologies.
A zero-carbon city runs entirely on renewable energy; it has no carbon footprint and will in this respect not cause harm to the planet.
Most cities throughout the world produce energy by burning coal, oil, and gas, unintentionally emitting carbon. Almost every activity human does involve burning one of these fossil fuels.

To become a zero carbon city, an established modern city must collectively reduce emissions of greenhouse gases to zero and all practices that emit greenhouse gases must cease.
The aim of a zero-carbon city is reducing carbon emissions from buildings, reducing waste, transport, materials and food emissions by 50% globally. It can be achieved by the following steps:

Just imagine if this technology was applied to every building within your city, it comes with unlimited benefits as following:

Transport has a major impact on the spatial and economic development of cities and regions. The attractiveness of particular locations depends in part on the relative accessibility, and this in turn depends on the quality and quantity of the transport infrastructure.

The concept of sustainable transportation promotes a balance between transportation’s economic and social benefits and the need to protect the environment.

Depending on modern-technology we can convert current polluting transportation into an environmentally friendly one.

So, Let’s have a look at 10 Most Amazing Sustainable Vehicles (Future Transportation)

If you are eager to know more about Urban Planning and Sustainable Development, Luckily IEREK is organizing The 3rd Version of International Conference On: Urban Planning and Architectural Design for Sustainable Development (UPADSD) to be held in Egypt at 22, Nov / 24, Nov 2018, follows the success of the previous versions which took place in Cairo, Egypt  during the year of 2015-2017.

UPADSD 2018 aims to bring together, scientists, urban planners, architects and other stakeholders from across the globe to discuss the latest scientific advances in the field.

Critical Topics will be exposed during this conference as written below: