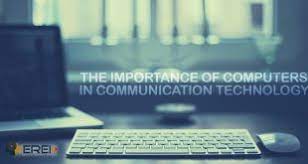 The Importance of Computers in Communication Technology

In the 21st century, technology plays a huge role in all facets of life, we always turn to computers to access information, create and express ourselves, communicate and collaborate, and track the achievement of learning outcomes. And as a part of smart city technology we must understand all factors of it.

So, before we can talk about the importance of computers, we must know all about the role of communication technology.

Technology plays a central role in searching for information. Online reference material, such as Encyclopedia Britannica Online, offer vast amounts of content supplemented by engaging multimedia and interactive links. E-book collections offer thousands of texts, and the sheer number of online articles and journals devoted to every imaginable topic make research efficient and highly rewarding. Information technology thus plays a key role in the development of the autonomous learner.

Information and communication technology also plays a role in expressing ourselves. Aided by the digital recording functions integrated into smartphones, tablets and other electronic devices, we are able to index the world the way they see it and add their own perspective to already existing bodies of knowledge to create original work. With audio, photo and video editing software and the various ways to post self-created media on the Web, we can not only access information but also contribute to its creation. The ability to be active members of the learning community, whether on the small scale of a school’s social media site or on the larger canvas of the entire World Wide Web, gives their work broader significance and affirmation.

Information and communication technology provides more opportunities to communicate and collaborate. With Learning Management Systems such as Blackboard, many courses have an online space to participate in discussion threads and forums, chats, and video conferences. Collaborative functions in office applications allow us to view revisions and add comments in real time, making the process of relaying feedback more efficient.

The importance of computers:

Computers are critical for communication and are the centerpiece of information technology. The early 1990s saw the emergence of household Internet use, which eventually spurred common use of email, websites, blogs, social networking, video chat and Voice-Over-Internet Protocol. Today, many traditional communication modes including postal mail and landline phones seem obsolete.

The World Wide Web, Internet and email revolutionized the way individuals communicate with each other. Rather than waiting days or weeks to see information, we can now view all information at the speed of light. Email has fundamentally transformed how people share information and conduct business based on the speed and flexibility it offers. Computers can process data at approximately 20 million bytes per second so it is easy for them to download and instantly display almost any text email.

Voice-Over-Internet Protocol — or VOIP — replaced the need for landline telephones in many instances. These lines can provide instant phone communication over the Internet, and often are cheaper than fixed phone lines. They also provide the ability to conduct video chats to see whom you are speaking with. VOIP platforms also store contact details for easy accessibility and dialing. The current drawback to VOIP, as of May 2011, is that 911 operators cannot trace the call back to the location.

Social networking sites including Facebook, Twitter, and LinkedIn allow users to rapidly generate content for people in their network to view. Rather than sending individual notes, social networking provides a constant stream of updates and information. These computer tools have taken communication a step further than email due to their ability to instantly communicate life and status updates to an entire network of people who can respond and comment to such notes in real time. Unlike email’s distribution lists — which essentially could transfer the same information to large groups of people — social networking’s streamlined and user-friendly interface precludes information overload that occurs from attempting the same functions in an email program.

While it is not a personal computer, routers are types of computers used to direct communication traffic. They are crucial to the efficient and correct distribution of calls, emails or another Internet traffic. Routers take “packets” of electronic data and send them in the direction to connect with the intended person. They can be used in the home but are also held in central data warehouses where hubs of traffic are routed in the same place.

So, if you are interested to know more about computers and communication technology and how it affects smart cities, join in International Conference on Future Smart Cities,

and the topics that will be discussed are:

1- The Development of Cities

Also you can visit our conference webpage: Future Smart Cities

Islamic Architecture Through The Ages

5 Benefits of Metal Recycling that will Inspire You