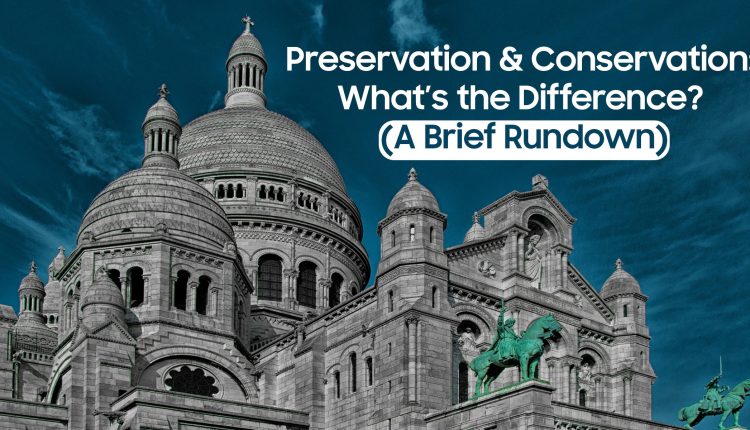 Historic and cultural sites all around the world are under imminent threat of being destroyed, whether it be by natural disaster, armed insurgency, pollution, poaching, and even tourists. As governments, such as the UNESCO, battle against destruction of these sites, we as people should know what we are doing and how to do it correctly, for the right reasons.

Preservation and conservation are sometimes both used interchangeably, not knowing the difference in meaning. Preservation is the protection of historical and cultural sites from human impact and human misuse altogether, while conservation is the protection and maintenance of historical and cultural sites by regulating human activity and not outright eliminating humans from the sites.

In the early 20th century, as environmental movements were popping up left and right, two factions emerged, the Preservationists and the Conservationists. Both factions believed in a greater good, just with differing opinions on the matter at hand as one wanted human impact to be regulated and one wanted it removed and eliminated.

One of the many preserved sites, Stonehenge, does not allow people within 15 yards of the stones. This restriction is possibly a consequence from the 1900s, when damage to the stones was increasing and the English government, realizing its historical significance, took matters into their own hands and implemented such a restriction in order to better preserve Stonehenge remains by inserting a rope around the remains to act as a sort of barrier, protecting them from vandals to this day. An example of a historical site that was conserved and repaired is Khonsu Temple, a temple that is part of the Karnak temple complex among the seven main temples of Luxor. The temple is accessible to all tourists with a standard fee, making the entire temple open for tourists with some exceptions of weak spots, tunnels, and elevated spaces that visitors are restricted from approaching.

The currently preserved and conserved zones are going mostly pre-historical territories and sacred religious buildings as they are deemed by society significantly important buildings. The majority of such territories have been mostly influenced by religion and art throughout the ages. Since ancient times, people have maintained churches and synagogues as they were the most prominent and important sacred structures of that time. The ongoing conservation and preservation of such structures goes to show how important they continue to be in the eyes of society and individuals.

What Could This Division Mean?

Although the opposing sides aren’t necessarily fighting, it may still cause internal problems such as deciding whether to preserve or conserve a site. As history seems to always proves, differing opinions often result in problematic and troubling outcomes. However, there is always room for more cooperation; both sides are fighting alongside one another for the greater good. Regardless of the outcome, the goal of protecting the conserved or preserved territories for generations to come remains the same.

We, at IEREK, encourage everyone to join our 2nd international conference on Utopian and Sacred Architecture Studies (USAS) done in collaboration with the University of East London (UEL), to talk about the importance of preserving and conserving utopian and sacred architecture from the 17th to the 18th of October. For more information about the conference, just click on the following link:  https://www.ierek.com/events/USAS-2nd

Living with the Pandemic: Online or on-site? IEREK’s return to physical conferencing