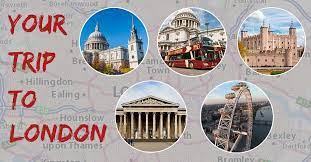 Your Trip to London

Your Trip to London

London is the capital of England and the United Kingdom. It’s considered as one of the world’s most important, sustainable, visited cities. London contains many Heritage and Cultural sites like The Tower of London, St Paul’s Cathedral and London Eye. Here are some of the interesting things to do while visiting London.

The Tower of London is one of the world’s most leading tourist attractions and a world heritage site which attracts visitors from all over the world. It’s located on the north bank of the River Thames on the border with the central city of London.

The impressive Tower of London has fulfilled many different roles down the centuries. It’s grounds and buildings served historically as a political prison, royal palace, place of execution, arsenal, public records office, and menagerie. This spectacular World Heritage Site is one of Britain’s most iconic structures which offers hours of fascination for visitors curious about the country’s rich history.

The British Museum is a unique museum that brings together the cultures of the world, continents, spanning and oceans under one roof, not like any other museum’s collections have the same breadth, beauty, depth, and significance. It has about eight million objects which allow us to discover many forms of expressions from the ancient world and explore the extraordinary diversity of human cultures from different communities and empires. It contains more than thirteen million artifacts and objects from Europe, Assyria, China, Babylonia and elsewhere. Also, it’s hard to know where to begin, most tourists head first for the museum’s most famous exhibits: the controversial Elgin Marbles from the Parthenon, the Rosetta Stone, the Egyptian mummies, the colossal bust of Ramesses II, and the spectacular hoard of 4th-century Roman silver known as the Mildenhall Treasure.

The Cathedral was constructed in the 11th century and now It’s one of the most famous sights of London. It’s iconic building is the second-largest building in the United Kingdom after Liverpool Cathedral.

It contains tombs and memorials of some of the nation’s greatest heroes, such as the Duke of Wellington and Admiral Lord Nelson and allows visitors to try out the acoustic quirks of the Whispering Gallery and climb to the Golden Gallery to enjoy breathtaking panoramic views across London.

Coca-Cola London Eye trip is a must-do and has been the visitor’s number one experience for over a decade since it was Built to mark London’s millennium celebrations in 2000. Once you step into your capsule you will feel the exhilaration as you rise up over the River Thames. With rising 443 feet over the Thames, your trip will last for only 30 minutes, but you will enjoy seeing spectacular views from your individual glass capsule like Big Ben and the houses of Parliament.

No matter how long you stay in London, The Big Bus is a perfect choice for travelers to create their own personalized and flexible sightseeing itinerary. Tick off all London’s landmarks on three different routes to allow travelers to see the city from a different perspective on an included River Thames cruise and walking tours. It’s a great opportunity to seat on the open-air upper deck and listen to live recorded commentary depending on the route chosen. The Big bus has many popular stops includes the London Eye, St. Paul’s Cathedral, and The Tower of London.

By attending Urban Regeneration and Sustainability URS international conference – 2nd edition, You will get the chance to visit these magical places and enjoy an unforgettable adventure.

URS will take place at the prestigious University of East London from 8th to 10th September 2020.