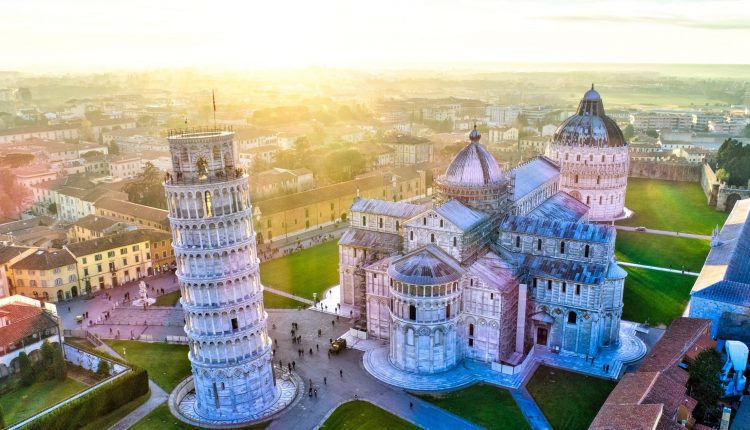 The City of Pisa and its Architectural Identity

Pisa, the capital city of the Province of Pisa, is located in Tuscany, central Italy. The city lies on the alluvial plain of the Arno River just before it empties into the Ligurian Sea.

The city of Pisa is known for its leaning tower (the bell tower of the city’s cathedral), but in fact, the city contains more than 20 other historic churches and several medieval palaces. Most of the city’s architecture comes from its history as one of the Italian maritime republics.

Pisa is now a quiet provincial university town that is well-known for its art and architectural treasures. While the  leaning Tower of Pisa originally known as ” the bell tower of the cathedral “, is the most famous image of the city, it is one of the many works of architecture in the city’s Square which is originally known as “Piazza del Duomo”, also known, since the 20th century as” Piazza dei Miracoli” (Square of Miracles), to the north of the old town centre. The Square of Miracles also houses the Cathedral“the Duomo”, the Baptistry and the monumental cemetery “the Campo Santo”. The medieval complex includes the above-mentioned four sacred buildings, the hospital and few palaces. All the complex is kept by the Opera (fabrica ecclesiae) della Primaziale Pisana, an old nonprofit foundation that operates since the building of the Cathedral to the maintenance of the sacred buildings. The area is framed by medieval walls kept by municipality administration.

The city also houses one of the renowned universities, the University of Pisa, which dates back to the 11th century and also has the Scuola Normale Superiore di Pisa, founded in 1810 by Napoleon, and the Sant’Anna School of Advanced Studies, as the best-sanctioned Superior Graduate Schools in Italy.

Founded in 1343 by an edict of Pope Clement VI, the University of Pisa, is the 19th oldest extant university in the world and the 10th oldest in Italy. The university houses the Orto botanico di Pisa which was founded in 1544 and is considered Europe’s oldest academic botanicalgarden.

The Italian public research university is especially renowned in the fields of Physics, Mathematics, Engineering and Computer Science. The Scuola Superiore Sant’Anna and the Scuola Normale Superiore, the Italian academic élite institutions are noted mostly for research and the education of graduate students.

It is easy to identify a Pisa’s identity by looking at its architecture. We can see all the cultural, historical and economic monuments meet in a place like the Square of Miracles. Preserving such an identity is the aim of the conference, where we will discuss the importance, development, reconstruction and preservation of cities heritage.