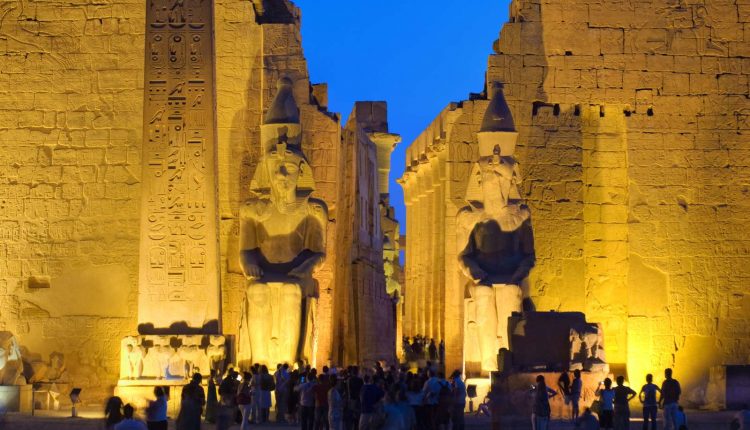 luxor city is known to be the greatest open-air museum in the world. It’s on the site of ancient Thebas, “ the Pharaohs” capital at the hight of their power on 16th century BC. The city lies between the east and west banks of the River which is crosssed daily by tourists and locals with Felucca boats and Ferries.

No place in the world compares to the grandeur and scale of the monuments which have survived from ancient Thebes (Luxor). The city is famous with many ancient monuments which can’t be missed. These sites are either located in the east bank of the Nile river like Luxor temple and Karnak Tample, or in the west bank like Tomb of the Nobles, The Valley of Kings and The Valley of Queens. The two grand temples of Luxor are the Luxor and Karnak Temples linked by the Avenue of Sphinx which has been recently renovated.

The Temple sits in the heart of Luxor in the east bank of the Nile River. It was built by the pharoah, Amenhotep III (1390-1352 BC). The walls are decorated with some of the finest carvings in Egypt and protected beacause much of the temple was buried until 1885.

The temple would have been surrounded in ancient times by warrens of mud-brick houses, shops and workshops but now lie under the modern town. In 1885, excavation works began which have cleared away the village and debris of centuries to uncover what we can see of the temple today. In front of the temple is the beginning of the Avenue of Sphinxes which ran all the way to the temples of Karnak (3 km to the north) and is now almost entirely uncovered.

The location of the temple makes it a very easy site to visit even when it’s not open to visitors, the temple is visible during a stroll down the Nile cornishe or through downtown Luxor.

The Karnak Temple, located on the east bank of the nile river, is an extraordinary complex of sanctuaries, pylons and obelisks dedicated to the Theban triad but also to the greater glory of pharaohs.

Its site covers more than 2 Km2 which is large enough to contain about 10 cathedrals. Contsruction of the Temple started around 4,000 years ago and continued up until around 2,000 years ago when the Romans took control of Egypt. Each Egyptian ruler made their own mark in the architectural work of the temple. The Karnak Temple was the most important place to worship in Egypt during the time of the New Kingdom. In the heart of the temple is the temple of Amun-Ra, the earthly ‘home’ of the local god. This main structure surrounded by the houses of Amun’s wife, Mut, and their son, Khonsu.

Chemical degradation associated with the intensification of agricultural irrigation and the rising water table over the last centurey, caused many conservation problems and accelerated damage to the stones, foundations and columns that have remained in place since ancient Egypt. This type of detoriation brings heavy losses to the historical record because many of the surfaces contain one of a kind carvings and hieroglyphs which are being actively threatened in the sense of the integrity of the site and compromising researchers’ abilities to understand the meaning of these decorative elements.

Nile River. It’s located between the Ramesseum and Hatshepsut’s Temple. The Nobles believed in the instant afterlife so they decorated the Tombs with cryptic passages from the Book of the Dead to guide them through the afterlife and made wonderful decorations with detailed scenes of their daily lives. Although there have been several discoveries on the hillside in recent years, these tombs are still being studied. They are divided into groups which are open to the public like the Tombs of Khonsu, Userhet and Benia, The Tombs of Menna, Nakht and Amenenope, The Tombs of Neferronpet, Dhutmosi and Nefersekheru.

There is no rival to Hatshepsut’s Temples. The unique multi-tiered structure is nestled up against the limestone cliffs at the shoulder of the river valley, a truly stunning sight. The site was used as a monastery during the early centuries which has experienced deterioration and has required to be heavely restored.

In the history of ancient Egypt, Hatshepsut was the only female pharaoh. After the death of her father she came to power during the age of the New Kingdom. Hatshepsut’s status as the only female to rule egypt in not the only reason for her fame but she was also a very successful pharaoh. She ruled over an era of peace, prosperity and expanded lucrative trade routes. This accomplishment is immortalized in the carvings of her temple. She also contributed significantly to many temples such as Karnak Tample. Until the mid-19th century C.E., Hatshepsut’s name remained unknown for the rest of Egypt’s history. When her public monuments had been destroyed, Thutmose III diposed of the wreckage near her temple at Deir Elbahri. In the 19th centurey C.E., excavations brought these broken monuments and statues to light, but no one understood how to read hieroglyphics at that time. Some of them believed these were decorations so her name was lost in history.

Egyptologist Zahi Hawass located her mummy from a tomb in the nearby Valley of the Kings to the Cairo museum’s holding and proved her indentity. Examination of that mummy shows that she died in her fifties. She is a commended presence in the enitrety of world history in present day and stands as the very role model for women that Thutmose III may have tried hard to erase from time and memory.

The Valley of the Kings is located on the west bank of the Nile Rivr near Luxor, it’s the most well known site for excavations of unique antiquities and ancient remains. Building Tombs were part of the ancient egyptians’ beliefs of the afterlife and their preparations for the next world. They believed in the afterlife where they were promised to continue their lives and Pharaohs were promised to ally with the gods.

Across the huge area there are many fascinating structures, tombs, and temples like Seti, Tutankhamun and Ramses II. There are also tombs of most of the 18th, 19th and 20th queens,

high priests and prietesses and other elites of these centuries. The Valley of the Kings was the major burial ground for most of the royal pharaohs during the New Kingdom’s period. Excavation is ongoing in some of them and until now it is continuously surprising archaeologists, but many are open to visitors on a schedule to allow for restoration. Seeing decorations on the walls of these tombs makes them a worthy visit even in the hottest months.

The tombs in the Valley of Queens were not only for queens, they were used for queens, princes, princesses and various members of the royal family. Some of the most famous tombs in the valley are those of the sons of Ramsses III, the building of Medinat Habu and Nefertari’s tomb. Medinat Habu is an impressive sight with it’s pylon and many of it’s walls still intact and with much of the oringinal paint still visible on its carved surfaces. Nefertari’s tomb was said to be one of the most beautiful and famous attractions in Egypt. It was completely painted with scenes depicting Nefertari being guided by gods.

About 1 km from the Valley of the Queens, there is the worksmen’s village, an ancient town where workers and artists who created the tombs of the Valleys of the Kings and Queens lived and were buried in. The tombs of some workers are beautiful works of art and really worth a visit.

All of these magnificent Places make attending the 4th international Conference on Conservation of Architectural Heritage (CAH) a great opportunity to experience and unforgettable adventure. The Conference will take place aboard a Nile Cruise sailing from Aswan to Luxor – Egypt from the 31st of January to the 2nd of February, 2020.

Check this link to know all the details about the conference: https://www.ierek.com/events/cah4th#introduction

The Launch of “AUPD2019” Summer School