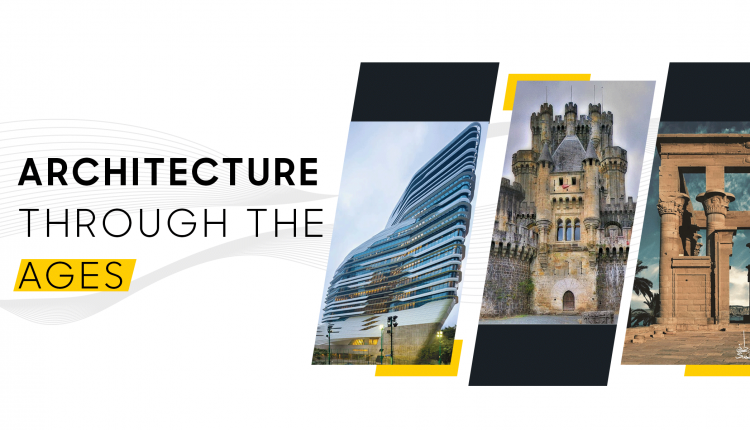 Housing and shelter are intrinsically human concepts. The fragility of our bodies compared to predators in the animal kingdom, and harsh environmental phenomena, necessitate the construction of shelter and housing to facilitate our safety from these external factors. This necessity, however, has evolved over the ages into an art form, and an intricate dance between creative expression and engineering. Stretching as far back as the 10th millennium BC, humanity has sought to express its identity, beliefs, and heritage in architectural construction, going beyond concepts of security and shelter, and expressing artistic integrity, and beauty in creative expression.

The origin of architectural development can be traced back to ancient Mesopotamia. The Mesopotamians’ reign spans from the 10th millennium to the 6th Century BC, and anthropologists have unearthed their artifacts and architectural works, aiding us in understanding our ancient ancestors. The Mesopotamians resided in what is now known as Iraq, and are best known for the construction of Ziggurats. The word “Ziggurat” is translated from the ancient language to convey the meaning of height, and greatness in contrast to plain lands and valleys, and it is used to describe temples that the ancient civilization constructed. Ziggurats utilize mud-brick materials and emphasize the height of construction to convey the greatness of the worshipped gods at the time, imposing a sense of awe in the ancient cities’ residents. The most famous construction of ancient Mesopotamia is perhaps the Ziggurat of Ur. Standing 64m in length, 45m in width, and 30m in height, it acted as the center of the city, and a shrine for the moon god “Nanna.”

Following after the Mesopotamian period, comes the legacy of the ancient Egyptians. They strongly believed in life after death and held strong theological beliefs in multiple gods and deities. The ancient Egyptian period spanned an impressive almost 30 centuries, from 3100 B.C to its conquest by Alexander the Great in 332 B.C. Ancient Egyptian architecture is considered by many historians and anthropologists to be the pinnacle of theological and sacred architectural design. Their pyramids, acting as tombs, aimed to immortalize the legacy of their Pharaohs, and guide them toward the afterlife, moreover, the temples that they constructed contained massive shrines and ornate columns, to appease their gods. The temples span the entirety of Egypt, currently congregating mostly in the cities of Luxor and Aswan.

Described as Mortuary Architecture, the ancient Egyptians extremely valued the afterlife and prepared for it their entire lives. Great strides and efforts were made to appease the gods and to pass through to a pleasurable life beyond death. This is most evident in the “Valley of Kings,” (Arabic: Wādī Al-Mulūk) which is a part of the ancient city of Thebes and is the burial site of most pharaohs from the 18th, 19th, and 20th dynasties.

Construction and urban planning of cities in the era mostly resided along the coast of the Nile River, the primary source of water in an otherwise arid desert. The integration of cities and rivers is currently seen as a sustainable method of design that promotes conviviality, livability, and oneness with nature, proving that the ancient Egyptians truly were ahead of their time.

It is almost impossible to mention the field of architecture, its history, and its influence, without mentioning the Greek and Roman Eras. Perhaps the most influential periods of all time, architecturally and perhaps philosophically, the Greeks and Romans elevated architectural design style to represent greatness, godhood, artistic expression, and communion.

Fast forwarding to the 17th century, elements of Baroque architecture took the European continent by storm, and can still be seen to this day. The architectural style included massive halls, decorated with a variety of colors, and painted ceilings. It aimed to inspire and amaze all who stepped foot in these historical monuments, instilling emotions of divinity and God-like influence. The Baroque style of architecture was introduced by the Catholic Church as a response to the reformation period and the Protestant church, to instill Christianity as the dominant religion and strengthen its numbers.

The architectural style is seen in European countries such as England in Saint Paul’s Cathedral, and Blenheim Palace. In Italy, it is represented in the Basilica of Superga, and the Museum of Italian Renaissance, and is further represented in France in Château de Maisons and the Pavillon de l’Horloge of the Louvre Palace.

Contemporary architectural development stands atop the shoulders of giants. Our ancestors greatly valued architectural design and construction. They were a means to convey emotions of divinity and inspiration. The representations of God-hood were resplendent and unabashed, prioritizing artistic expression, and creativity. History is well proven to be the best teacher of all, and the field of architecture is no exception. If we are to progress toward perfection, a historical look is imperative, so that we may learn from the greatness of our past.